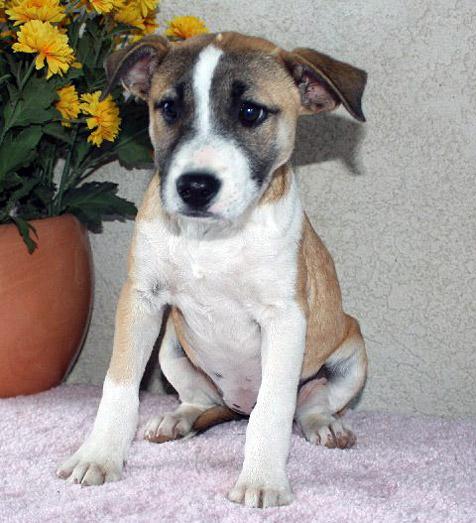 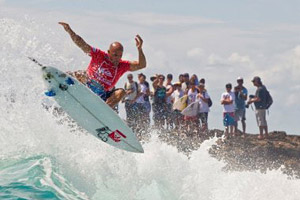 First, a bit of background: Kelly Slater has been winning surfing competitions since he was 10 years old. He turned pro a year before graduating high school and was the youngest surfer ever in 1992, at 20, to win the world championship. Some people, like professional sports writers, say he is to surfing what Michael Jordan is to basketball and Wayne Gretzky is to hockey. In a sport known for sporting a laid-back attitude, Kelly has anything but! 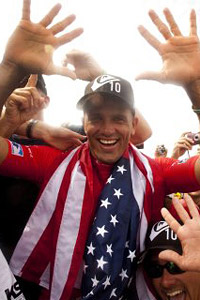 As if winning a historic 10th ASP World Surfing Championship wasn’t enough to keep surfing legend Kelly occupied, he also stays busy assisting others along the way however he can. Among his many endeavors include the Kelly Slater Foundation. His latest efforts involve helping the unlikeliest of underdogs.

In celebration of the big 10th win recently, and in honor of Kelly’s history of philanthropy, the Quiksilver Foundation donated a total of $100,000 to be split among 10 different nonprofits of Kelly’s choosing (aka Kelly Slater's 10 for Ten). Best Friends was on Kelly’s list. But now, Kelly is championing yet another cause. He’s trying to find homes for a loveable stray mother dog he helped rescue, along with two of her puppies.

Puerto Rican dog and her puppies

Prior to winning the 10th ASP championship, Kelly was in Puerto Rico with his manager and long-time Best Friends’ supporter, Terry Hardy. At one of the beaches, they were approached by a somewhat scroungy-looking beach dog, a female who had some cuts and open sores on her body. 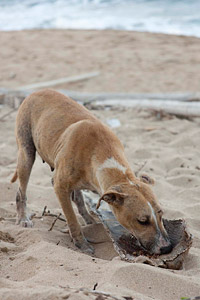 No doubt she’d had a rough go of things, but that didn’t seem to break her spirit. She was as friendly as could be and wanted nothing more than to be with people. "She really wanted human interaction," explains Terry. "[She] was very sweet and loved affection."

The dog, who they later named Hollow, began following Kelly and Terry all around the beach. In Puerto Rico, the beach dogs don’t often receive much notice from people. She was making the most of an opportunity to say hello! In the end, Terry and Kelly wanted to make sure Hollow had a better life. They found a veterinarian who could treat her, and they also found her a temporary home for rehab.

At the vet, Hollow was treated for skin infections and other small issues, but she also had a hidden card up her sleeve. Hollow was oh-so-very pregnant! Two weeks later, she gave birth to eight adorable puppies. The one-dog rescue turned overnight into a nine-dog rescue. 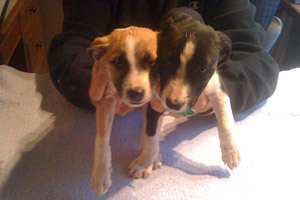 Two of the pups

In Puerto Rico, adoption efforts proved successful. They were able to find homes for six of the puppies. Hollow and the two remaining pups, however, didn’t grab anybody’s attention. But nobody was giving up on them. Soon, all three dogs moved to Southern California, where they now hope to find homes. They are being helped by yet another compassionate component in this rescue - Tina and Tom Dunn - are giving them the best of care at their boarding facility, Double T Kennels. They're still waiting with wagging tails for a new life ahead.

Now that’s the heart of a true champion!

Adopt a dog or puppy